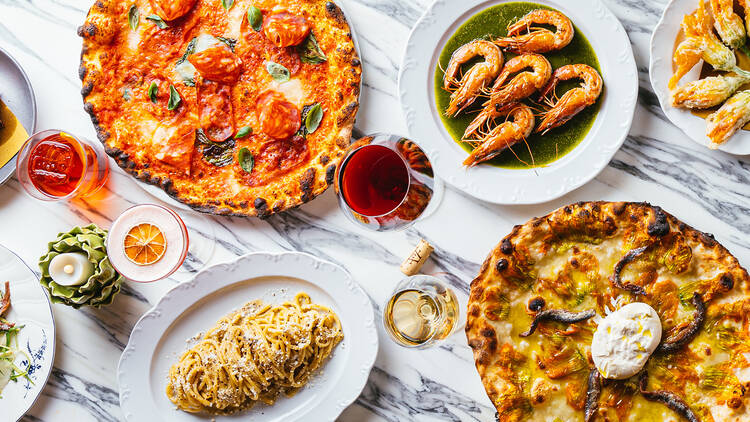 Hollywood is undoubtedly LA’s most famous neighborhood. Not only does it known for star-studded pathways, tourist hotspots, and extravagant movie premiers, but it also has some of the finest restaurants in Los Angeles. The neighborhood’s restaurants—are inevitably patronized by a celebrity or two, ranging in terms of price and cuisine, making the region a destination site for hardcore Thai food fans and social media influencers.

Eating well in Hollywood can be simple if you follow our complete list of food near Hollywood, Los Angeles, including everything from high-end Italian restaurants to a Japanese wine bar and some of the delicious Thai food in the city.

It’s a wonder to see an omelet being prepared at Petit Trois. The butter, a large pad that swirls about the pan before being drenched with whisked eggs over low heat, comes first. The mixture settles shortly before being removed from the heat and carefully pushed and prodded for several minutes until it is ultimately folded into one consistent, buttercup-colored omelet. Petit Trois’s menu entails a curated selection of typical French dishes—steak fries, mussels marinières, and chicken leg served in an amiable ambiance.

Mother Wolf, located in the center of Hollywood, is pasta expert Evan Funke’s devotion to hyper-regional Roman cuisine, in addition to being a celebrity magnet. The Hollywood restaurant’s all-around gorgeous dining room, replete with crimson banquette chairs, mirrored columns, and chandeliers, may evoke memories of grand old New York City dining rooms. But the expansive menu of the pane, pasta, pizza, and more feels more contemporary than anything else.

Few restaurants strive for a degree of culinary precision and brilliance on display every night of service at Providence on Melrose Avenue. While this quiet, white-tablecloth restaurant specializes in seafood, it is much more than a fish palace. It has two Michelin stars and is one of the top fine dining establishments on the West Coast. Whether you eat a la carte or choose the chef’s menu, there’s always an excellent cut of steak in the mix.

Kate echoes the scenery of Tulum resorts with a reed tunnel entry, a beautiful outdoor dining area, and an expensive, Yucatan-inspired cuisine within the Tommie Hollywood, only steps away from other significant fresh openings like Bar Lis. The former head chef of Guerrilla Tacos serves multiple crowd-pleasing small meals here. However, bigger format entrees like lamb neck barbacoa and Pescado zarandeado (grilled entire fish) easily steal the show at Ka’Teen.

Kensho resides in the transitional region between the Magic Castle and the historic landmark Yamashiro, with a simple Japanese-inspired menu that resists categorization. Kensho’s less-is-more mentality has made it one of the city’s most enchanting, underestimated dining experiences, pairing a meticulously chosen sake and natural wine selection with a tiny, almost-Japanese cuisine consisting of great small dishes.

This Thai Town restaurant’s homestyle food draws traditionalists from all over the city. Sanam Luang Café does not provide fusion or excessively sugary noodles; instead, it serves some of the tastiest Asian comfort cuisines. Begin with a refreshing appetizer of tom kha kai, a spicy coconut soup with plump chicken, mushrooms, lemongrass, lime juice, and fresh chili. Then try the khao pad krapow gai, a tasty and hot chicken-basil-rice stir-fry with an optional egg, and the khana moo grob.